Bernadette Hicks, Director of ABC Toon Town and member of the Collaboration for Early Childhood Board of Directors

With a background in the corporate sector as a project manager, Bernadette Hicks did not ever think she would find herself directing an early childhood center in Oak Park where no day is ever the same. She and her family moved to Oak Park to shorten commute times and for her kids to have an excellent public education. Then, her mother-in-law asked her to help manage the family business and her whole life changed. The Collaboration caught up with her in ABC Toon Town’s back office. Learn about Bernadette, an early childhood hero. 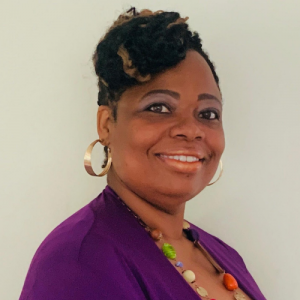 Collab: What are three words that best describe you?

Collab: You seem calm, too. Are you a calm person?

Bernadette: This is one of my calmer moments. I’m pretty even-keeled. The older I get the more mellow I get. I used to let things rattle me, but I’ve mellowed out.

Collab: What drives you? What gets you out of bed every morning?

Bernadette: Right now, what’s driving me is this place. I get to see all these faces every morning. The kids, they don’t know it’s a pandemic! They are smiling, they’re ready to go. My days are not the same. Every day is something different. The kids really keep me going.

Collab: Because they are probably just ready to play!

Bernadette: The stress that the kids may feel outside of the center, we want to make sure that they don’t feel ANY of that here. I tell my staff that the children can feel your energy. That outside pressure, whatever stress is going on at home or whatever we’re all dealing with, we don’t bring it in with us. I have adult children now, but I can just only imagine the stress that the families are under right now.

Collab: Tell me about your career. You mentioned a corporate background, so tell me how you found yourself…

Collab: Yes! Some people just know what they want to do, but some people don’t…

Bernadette: …and I’m one who did not! If someone had told me that this is where I would be sitting today, more than 20 years ago, I would have told them you don’t know what you’re talking about. My mother-in-law founded ABC Toon Town. It was home based at that time, so she did home-based child care for around 15 years, but had always wanted to expand it to a daycare. For a long time, ABC Toon Town was not on my radar. But I always noticed that my mother-in-law was just filled with passion and love for the children that she cared for. They just gave her life! Even later when she wound up getting ill, she would still come to work and was energized by her kids. I saw that in her and was like, wow. She would say, I’m getting old, and I’d really love for you to take over the business. For so many years I said, no, no, no! But after feeling the stress of corporate America, I started to change my mind. I told her, if I’m going to do this, I have to go back to school to be prepared to do this. That’s just the kind of person I am. I’m not going to take on a responsibility and not understand what it’s all about. 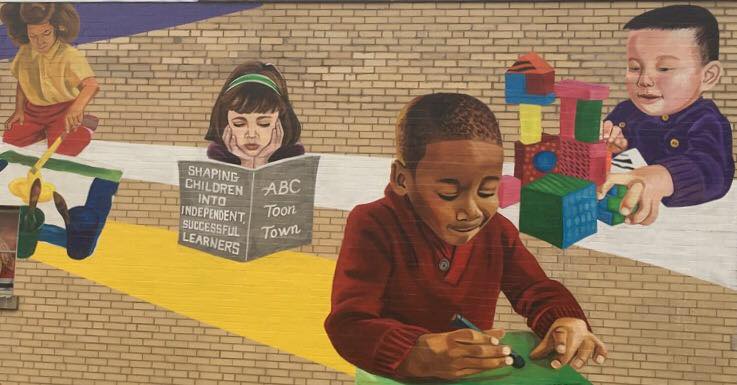 Mural on the wall of ABC Toon Town

So I started taking some early childhood courses. As a matter of fact, the very first early childhood class that I took, Diana Rosenbrock was my teacher! She was SUCH an awesome teacher. I don’t know if I would be doing this if it weren’t for her. You know how sometimes it feels like everything was meant to be? She had that same spark and passion for young children as my mother-in-law. When I took her class, the lightbulb went off. I just got it. It was the realization that if you can impact that child between birth and five in a positive way with quality programming; by nurturing them, and tracking their development, then the odds of them being successful are much greater. So it was Diana and my mother-in-law’s passion that started to get me going. I didn’t get the passion right away, I continued taking classes, and shifted to working part time at my job so I could be more involved in the program so I could understand and get acclimated.

“When I took that class, the lightbulb went off. I got it. It was the realization that if you can impact that child between birth and five in a positive way with quality programming; by nurturing them, and tracking their development, then the odds of them being successful are much greater. That’s when I got it.”

Collab: So your mother-in-law had to convince you to make this career shift.

Bernadette: I left corporate in 2005, and started working with her. At that time, we still had the one location that served infants through preschool but then another space became available so I thought, we could convert one space to infants and toddlers and make the other space kindergarten and preschool, because at the time there was no full-time kindergarten. And what we were finding is that a lot of the children who were leaving preschool to go to kindergarten were not ready for their kids to leave our care. In 2006 we opened the second space. My mother in law was the Executive Director of the infants and toddler site and I became Executive Director of ABC Toon Town II which was the preschool and full day kindergarten. At some point we also started offering before and after school care.

We did that together for five years. She was mentoring me and I was learning, I was thriving, I was growing. And let me tell you, it was really hard! I thought that coming from corporate into that setting, that it would be smooth sailing. I’d taken classes and coursework, I thought, oh this will be easy-peasy! I was a project manager so I was used to juggling different things, this will be a piece of cake. NO. No, no, and…no! It was SO HARD! I would go home crying some days, just saying what was I thinking?!

Collab: Can you tell us a little bit about what made it so hard?

Bernadette: Oh, this role is multi-faceted! Sometimes you’re the chef, sometimes you’re the counselor. You wear about 10 hats. So I was working 10-11 hours a day and building a new program. I was still trying to build our brand. I had a good solid three years of working with my mother-in-law. Then once she took ill, I took over both centers.

Collab: What is your connection to Oak Park and what does it mean to you?

Bernadette: We moved to Oak Park prior to ABC Toon Town because we were looking for a place where we could raise our kids in a good school district. That’s what brought us here. Both of our kids had an excellent education here. We were also really drawn to the family-oriented nature of Oak Park and the multicultural aspect of it. It just has so much to offer families. It is part of who I am now. My kids are adults now, and ABC had been here 23 years this year in May. We’ve been in the community for a very long time. Oak Park has been good to us.

Collab: With all that in mind, can you talk about some of the challenges you’ve overcome over the course of this past year?

Bernadette: When we first shut down last year, I honestly only thought it was going to be two weeks. When we were shut down for 10 weeks in 2020, I was going nuts at home! I appreciated the rest, because I didn’t realize how exhausted I was, but after that first couple of weeks, I was like, ok let’s go! The longer we stayed closed, the more worried I got. And on top of that, the mixed messages with the media, ‘this is safe, that’s not safe; wear a mask, don’t wear a mask…’ and then the fact that we couldn’t get tested when we first shut down, it was stressful. While we were closed, I was wondering if the families were even going to come back when we reopened. We got messages from DCFS (Department of Child and Family Services) about the things we had to do to reopen. There were so many policy changes and structural changes. It felt like we were getting new information every other week.

But I stayed in contact with my families. I kept them informed of what was going on. I made sure they knew what I knew. That to me was very important. And the Governor kept pushing things back, and pushing things back. Initially I don’t even think he was going to reopen child care centers in phase three so there was the possibility that we wouldn’t reopen until much later than we did. But I think he realized that the child care industry would not recover if he kept us closed for much longer than he had.

Collab: Yes, if child care isn’t there, families can’t return to work because they don’t have that service.

Bernadette: Our capacity was cut by 35%. That was hard. How were we supposed to operate at a 35% reduced capacity? And then, when we reopened in June, it was very empty in here! The months of June, July and August were very quiet. It took time for families to feel comfortable sending their kids to us again. We had to change a lot, too. We have to wear masks, all children 2 and over have to wear masks. And what people don’t realize is that the day care industry is already highly regulated as far as what we have to clean and sanitize and different things like that. We do that anyway, so we had to add all these precautionary layers on top of that, like changing our drop-off procedure — no parents allowed in the classrooms. The temperature checks…So that’s what I mean when I say it was stressful.

Just thinking about, what if someone does get COVID-19? What happens then? The stress level was high. But we’re in our zone now! Everybody knows what to do. Let me just say, just the day to day of running a program can be stressful, but running a program with COVID-19? It becomes extremely stressful.

Collab: How are you taking care of yourself?

Bernadette: Ha. Ha. Good question. I try not to take the mental stress home, but sometimes it comes with me. I just think as a provider, the mental strain of it all can be very overwhelming.

Collab: What are you looking forward to in 2021?

Bernadette: I am looking forward to some normalcy. I am looking forward to getting vaccinated. We are in group 1B. I’m ready to be around my parents. I’m ready to exhale. I feel like everybody’s been like this [holds breath] for the last year and we just need to exhale. I was an avid traveler before COVID-19 so to not be able to go anywhere — and I don’t know what travel will look like in 2021 — but I think the vaccines offer hope. I’m very hopeful.